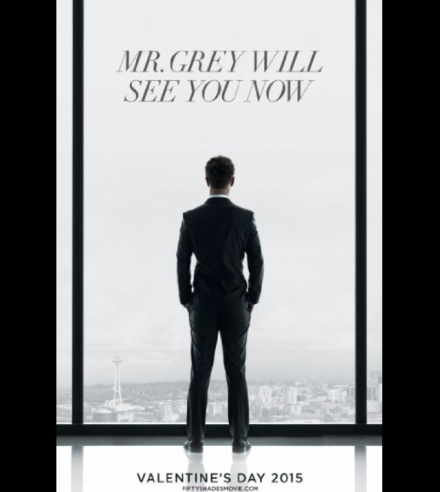 So let me start by asking; how many of you ladies who have been counting down the days with baited breath and planning to spend Valentine’s day with a box of chocolates and Christian Grey, would actually get down in his infamous Red Room of Pain…Any takers?

I’m probably sharing what will be received as an incredibly unpopular opinion. However, I find it funny that this is the book most woman in America went crazy for. I read the first two books several years ago. I haven’t gotten around to the third and I don’t plan to (so if someone wants to let me know how it ends that would be great,thanks). This is not because I’m some prude who thinks BDSM is scary or too kinky. Frankly, E.L. James writing sucked. Voice, wit and word choice were not what had these books flying off the shelves, proving once again sex sells.

As someone who has visited Seattle many times I can tell you, if British housewife James has taken a trip across the pond it was not to Seattle. The vague scenes depicting mountains, perpetual gray skies and the occasional space needle siting definitely leave something to be desired when it comes to scenic descriptions. But who needs scenery when you’ve got lip biting and pleasure balls, right?

I also find it rather comical that 50
Shade die hards seem to be pretty bummed the scandalous tampon removal scene didn’t make it into the film. Really girls? I don’t know about you but if a sex scene (or 10) needed to be cut I’m ok with that scene being one. Christian removing Anna’s tamp doesn’t exactly scream sexy movie scene to me. It’s a film not a porno, remember there was a plot in there some where between all the whips, chains, and sex. One of the main reasons I am still curious how it ends is because I’m intrigued by Christian’s character and what led him to become the person he is, regarding both personality and sexual preferences. Despite the fact that every time I read his words in the book I heard a Optimus Prime’s (yes,the transformer) voice in my head.

Anastasia perplexes me because as a girl, at 21 or even now at 24 I think I can speak for myself and most my girlfriends when I say our response to the Red Room would have been quite different. There would have been a lot more WTF’s and are you kidding me right now’s? Throughout the course of the book if we were Anastasia. And it probably would have taken more than his millions, lavish gifts and clothes to get me to go along with some of his bizarre requests. Even despite the cool plane ride.

I’ll admit despite the fact that I don’t find the actor playing Mr.Grey, Jamie Doran as swoon worthy as everyone else does won’t deter me from seeing the movie. Not on Valentine’s Day and maybe not even in theaters but I want to see what all the fuss is about. Hypocritical as it may seem, can you blame me?